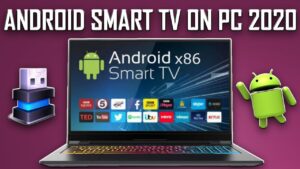 Turn pc into android tv box how to install full android operating system on your windows computer. Now if you guys have an old computer laying around or if you have a computer that you want to do dual booting. This might be an ideal setup for you because with android.

Guys you get a lot of freedom you get some apps that you won’t necessarily get on windows. I said if it’s an old computer that’s just laying around you might as well put it to good use so this will be a good project to to test out.

So for this you’ll need a usb drive and you also need a computer to install. This from you can do this via doable which means that you have two operating systems on your computer. This will require you doing a partition on your computer not extremely difficult. But i’ll put a couple useful links in the description where you guys can go ahead. And get more instructions on partitioning your drives.

So if you’re new to the channel i’ll do everything tech from your streaming reviews streaming news product reviews unboxings. Everything in between hit the subscribe button in the top right smash a notification bell make sure you select all on notification that way

We went ahead and select the image so here’s the file system here’s all the information everything looks good. So we’re just going to go ahead and start the process all right. It’s gonna have some recommendations written as iso recommended click ok. uh warning all the data will be erased from this drive. So make sure guys use a usb drive that you’ve copied your data over so i’m gonna click okay.

Now it’s going to go ahead and go through the process it is going to take a little bit so i’ll go ahead and fast forward this video. So the image has been written on the usb we’re just going to go ahead and close and we’re going to eject our usb drive and head over to our computer. So the computer is a little dusty i know but once you boot it up guys with the usb inserted have to hit f12 for a dell computer. If you’re on a different type of computer the buttons might be different.

So you’re better off googling that so once i get to boot menu i went to usb and it brought me to this interface now there’s a couple options here. There’s a live cd option which basically allows you to run a demo version without saving any data. That’s a good way to test and make sure everything will work before you install the full operating system. Now below that you also have a debug mode but we’re going to go to advanced and we’re going to go where it says automatic installation.

So click on that it will go through run some scripts in the background now brought us to the disk selection of course it’s not going to be the removable disk. It is going to be the hard disk which is 238 gigs We’re going to select that it’s going to tell you that it’s going to erase the entire drive. So keep that in mind everything will be wiped go ahead and click yes and I was going to go ahead and write the Os to the new drive. like i said guys there is a dual boot option let me know if you want me to do a video on that.

It is going to be more involved but uh drop your comments let me know. If you want to do a follow up on how to make this dual boot. That way you still keep your windows and you have the android operating system on the same computer all right. So it’s currently syncing the disk and here we have two options we can either run it directly. Or we can reboot let me just go ahead and remove the usb drive and now i’m just going to go ahead and reboot the system.

So depending how you have your bios set up you might have to go in here. And just select your default drive to boot from so for me it’s going to be the hard disk but like i said depending on how you set everything up it might be a little bit different for me on the legacy boot options i am going to select the internal hard drive and now i’ll give you the three options. it will start counting down and it will just default boot from the first option up top all right.

so just go through the steps and when you’re done it’s going to ask you to select which launcher you want to use for this operating system i select the true bucket launcher which gives you a more integrated android feel and a good thing about this guys is that. This doesn’t have any bloatware it just has the default application that you would expect from an android operating system. Before we cut this video just wanted to let you guys know that there’s one option that you should go to your settings.

And select this will make your google applications compatible. so if you go to your settings you’re going to go down to where it says apps compatibility and just want to go ahead and turn that on right. So i’m just going to select the launcher select it always. But you can always go in and put a nova launcher or your favorite android launcher on here so like i said everything works you can see i’m in the google play store. I am able to search applications download applications this computer is a touch screen. So I was able to use the touchscreen function and I will be doing more testing on this like I said.